Through the end of April, Dover NH Real Estate has posted significant gains year-over-year in terms of the number of homes sold and their median sales price. The market in Dover NH is really heating up! There have been over 15% more Dover NH homes sold year-over-year through April 31st compared to 2011. The pace of increased activity locally is palpable- I can say I have certainly been busier in the first four months of this year than last, and colleagues in the business are reporting the same thing. The best part is that not only has the number of sales increased, so too has the median sales price at which these homes have sold: 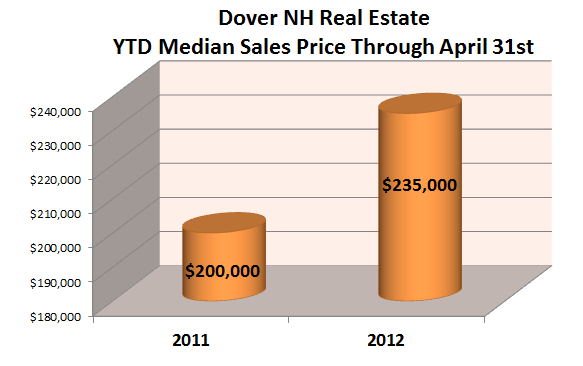 The median sales price is the point at which half of the homes sold have sold for less, and half of the homes have sold for more. It is considered a more reliable assessment of a market as it serves to reduce the impact on unusually high and low priced homes affecting the average price of a market. Seeing such solid increases year-to-date in both the number of properties sold and median sales price is very encouraging. Looking at other metrics that we consider in assessing the health of the Dover NH Real Estate market, we see that the average number of days that a property spends on the market before going under contract has remind more or less the same year to date: 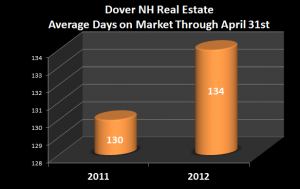 It is encouraging that in the face of rising median sales prices, buyers were still moving to contract on a similar pace as the first four months of 2011. The final metric that shows how well the market in Dover is doing is the listed versus sold percentage of Dover NH Real Estate: 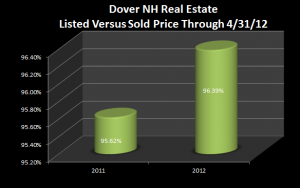 Year-to-date Dover NH Homes are selling for approximately three-fourths of a percent more of their listed price than they did during the first four months of last year.